In the workshop this month are a pair of live edge, burr elm, side tables. The burr elm slab used for the tabletops was picked up from Wentwood Timber Centre a few months ago. This is unusual, as most timber for AxoMan Design furniture comes from my own sustainably managed small woodland. I couldn’t resist this special burr elm board though!

Elm timber is relatively rare in the UK after Dutch Elm Disease killed most of the native trees in the 1970s. The ‘burr’ (‘burl’ in the US) is a bulbous growth on the trunk of the tree, highly prized for it’s beautiful irregular grain. The lumpy, spiky form created under the bark will be delicately cleaned up and form part of the live edge.

The live edge boards , flattened by router sled and finely sanded will sit atop ‘X’ leg oak frames to create a stunning pair of bedside tables. Photos show a mock up of the leg frames to help decide on orientation. ‘X’ legs parallel to the live edge or the cut edge?

Oak is a good match for elm and will be used for the ‘X’ legs and a cylindrical stretcher, separating each pair of legs. The two pieces of each ‘X’ are joined with a traditional halving joint which slots neatly together for a clean and simple appearance. The oak dowel clamped in the top ‘V’ of each leg frame in the mock ups will pass though the centre of each ‘X’ leg once assembled.

These two tables are for a commission but I have around half of the original board left. The plan is to use this for a coffee table. If you’d like it to be something else please get in touch!

It’s long overdue but construction of the woodland workshop is underway…. The aim is to gain a bit of shelter whilst working and store milled timber whilst it seasons.

The site for the workshop is located at the end of an old gravel track and at the edge of a woodland clearing. Beneath a thick layer of leaf litter the old track provides a stable surface of compacted gravel to use as a base. It’s also where a medium sized ash was felled at the end of winter, perfect to mill and stack where it lies.

The workshop frame sits on eight small concrete bases, small enough to mix by hand. The base size means each base can be dug out easily, enabling the area to revert to woodland floor if the workshop is no longer required. The frame is simply bolted together allowing it to be dismantled, re-used or relocated.

Hazel poles, sourced metres away in the woodland, provide temporary bracing and pegs whilst the frame is erected. Flat faces are created by shaving the ends with the drawknife to ease connections.

Having erected the frame it’s time to install the salvaged, profiled steel, roofing and rooflights. There’s also a layer of steel mesh being fixed to the frame. This will sit between the frame and cladding as a deterrent to opportunist timber thieves!

After the roof is complete, it’ll be back to the chainsaw to mill the cladding from a fallen larch that is lying about 300 metres away. The heartwood of larch is naturally durable so won’t need a preservative coating to prevent decay. The embodied energy will be incredibly low, just the fuel for the chainsaw to mill and my packed lunch to power transportation. The intention is to use the larch ‘green’. This means installing it unseasoned and designing fixings to allow for the inevitable shrinkage.

The moisture content of freshly milled hardwood ranges from around 35% (ash) to 55% (birch). Air drying will reduce moisture content to around 20% but it takes time…..approximately 1 year per 25mm of thickness. This drying, or seasoning, requires the timber to be stacked and weighted on a stable base. Each plank in the stack must be separated with timber ‘stickers’ to provide even airflow to both faces of the plank. The aim is to limit splits, twisting and cupping as the timber dries and shrinks. This process can be significantly speeded up (and lower moisture contents achieved) by kiln drying. Building a solar powered kiln will be the next project …..

Working on a live edge bench incorporating some olive ash. Occurring more frequently in older European ash, olive ash is a darkening of the heartwood to a similar tone and grain to olive wood. The contrast in appearance with the more familiar pale straw colour of ash timber is sought after by wood turners ….. and furniture makers.

The olive ash in this piece swirls through long stretcher and onto the top face where dovetail halving joint meets the short tie which joins the legs. The ash used for the ties is chosen so that the olive ash connects to olive ash.

This one is already sold but if you’d like one (with or without olive ash) please get in touch.

The table top is two through cut boards edge joined with a loose tongue and finished with danish oil. Unusually for oak, it’s been possible to retain the sapwood giving a stronger contrast in grain between the lighter sapwood and darker heartwood. Oak sapwood is prone to rot and insect attack (woodworm) prior to milling so it’s great to get it intact and be able to use it.

The live edge larch bench I’ve been working on for the past few weeks is nearly complete. Just need to wedge and trim the tenons that are currently visible poking through the seat. Then it will be time to wax and send it on its way…

This bench is a commission based on a live edge oak bench that I completed earlier in the year which has proved pretty popular (I have another oak one underway too). The larch bench is a fair bit bigger at 1500mm long and 360mm wide which required a few design modifications and new techniques beyond just upscaling the timber sizes.

At 360mm wide, the double live edge board used for the seat is too wide to pass through the planer. I’ve therefore built a workbench long enough and crucially, flat enough, to use with a router sled. This al fresco bench, improvised from a few fence posts and a skip salvaged worktop, forms a flat reference plane. A plywood sled, containing the router, is then passed back and forth (94 times with a 16mm router bit) to create a perfectly flat slab and a lot of sawdust.

The diagonal stays linking the long stretcher to the underside of the seat are the main design modification. These add stiffness and stability to the longer span without compromising the delicate appearance of the bench.

Chainsaw milled from a fallen branch, the grain twists and turns far more than a straight tree stem. As it seasons, the timber shrinks and the twist in the grain is reflected in the shape of the finished board. The seasoned board could be planed flat but the result would be a thinner board, much thinner in this case and too thin to use as a bench seat.

This all makes for major challenge when marking out traditional joints without a consistent flat and square reference point. Scribing, slowly paring with a sharp chisel and lots of patience are required. The corner bridle joints used are an open type of mortise and tenon, though not usually used in this way. These are then held together with long oak pegs which also stop the bench racking.

Back to school for the kids means back to the woods for me and Milo the dog.

Using the chainsaw mill, I’ve been cutting some chunky slabs from a fork in an ash tree. The plan is to use these to make some coffee tables once they’ve been air dried for a few years.

Cutting through the fork allows wider boards to be made, these ones are about a metre long and half as wide. I’ve kept them deliberately thick, about 60mm, to allow for cupping and twisting that’s likely to occur from cutting through a fork in this way. 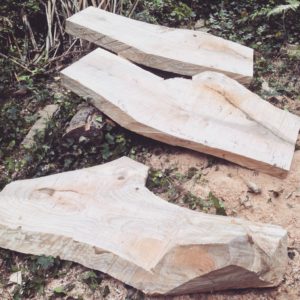 Battle of the balsam

One of the sustainable management practices I aim for in the woodland is to remove invasive plant species. These include Japanese knotweed, rhododendron and Himalayan balsam. I’m winning (I think) with the rhododendron and the knotweed but the balsam is able to propagate at a phenomenal rate, easily outstripping the rate I can remove it.

This impressive invader can grow from seed to 10 foot triffid in just a few months. It outcompetes and shades out all native plants, including bracken, grass and nettles. Its other key to success is touch activated, explosive, seed pods! In late summer as the wind moves the head of each plant, the pods explode, sending thousands of seeds dozens of feet in every direction.

I’ve pulled up thousands of these plants, prior to the seed pods forming, in an attempt to halt their spread. However, it always manages to outflank me. Every time a tree falls, the balsam is quick to utilise the additional daylight. Seeds lay dormant for years, germinating when a gap appears in the tree canopy.

On a partially positive note, the Himalayan balsam is a good source of nectar for pollinating insects. This may be good for the bees but not necessarily for pollination of native plant species which have less nectar available.

So, the battle of the balsam will continue, even when it seems a thankless task.  It may take over clearings in the summer but it cannot penetrate where the tree canopy is continuous. Ultimately, the woods will win the war!

Three more solid ash wooj tables roughed out with the chainsaw mill on another sunny day in the woods.

Milled from a large ash log where it fell across a fairly steep bank (steeper than it looks in the video) then cross cut to height. The chainsaw mill is perfect for low impact processing of timber. No vehicles, no heavy machinery, not even a heavy horse, just what can be carried in and out on foot.

The chainsaw mill is a simple device that fits to the bar of the saw allowing the log be squared off or cut into boards. Pretty much everything I make starts off in this way. The next stage will be cross cut to the final height and shape the front face, currently covered in bark. Then it’s ready to plane followed by a lot of sanding….

If you’d like one of these they’ll soon be available in the online shop.

The faceted coffee table I’ve been shaping in the woods is almost ready….

The solid ash table top, cut from a fork in the tree and air dried for two years has been shaped with chainsaw, draw knife and angle grinder.

Three simple ash legs have been recessed into the underside.

The table is now complete and available in the online shop.